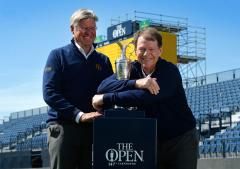 Photo taken by The R&A.

Tom Watson is welcomed as Global Ambassador for The Open by Martin Slumbers, Chief Executive of The R&A, at Carnoustie, the venue for this year’s Championship.

On the 6 June 2018, St Andrews, Scotland the five-time Champion Golfer of the Year Tom Watson has been appointed as the first ever Global Ambassador for The Open, golf’s original Championship.

Watson returned to the scene of his first triumph in The Open, on his debut in 1975 at Carnoustie, today to formally begin the role which will see him promoting golf’s most international major championship around the world.

The 68-year-old bid an emotional farewell to The Open at St Andrews in 2015 when he waved to fans from the Swilcan Bridge. Watson followed up his triumph at Carnoustie with wins at Turnberry in 1977, at Muirfield in 1980, at Royal Troon in 1982 and Royal Birkdale in 1983.

Watson came close to a sixth triumph in The Open at St Andrews in 1984 before a late charge from Seve Ballesteros and, at the age of 59, nearly won the Championship at Turnberry in 2009 before losing out to Stewart Cink in a play-off. He made 38 appearances in the Championship overall.

Watson is tied with Australia’s Peter Thomson as well as James Braid and JH Taylor on five victories, one fewer than the third member of the ‘Great Triumverate’ who has the most victories, Harry Vardon.

In 2014, Watson’s exemption was extended to enable him to compete in the following year’s Championship and he was presented with a commemorative solid silver Player’s Badge by The R&A in recognition of his outstanding contribution to The Open over more than 40 years.

"I am honoured and very much look forward to be the Global Ambassador of The Open,” said Watson. “It's a role in which I am keenly interested because of the ever expanding global interest and importance of The Open as what is truly ‘The World's Open’.”

Martin Slumbers, Chief Executive of The R&A said, “Tom Watson is one of the finest golfers ever to have graced the sport and has enjoyed an extraordinary career in The Open over many years. He has a special place in the hearts of generations of golf fans who have followed him and will always be remembered for the great joy he has given us with his incredible golf, warm personality and exemplary conduct.

“We have worked closely with Tom for a number of years and when we began to consider an ambassadorial role for the Championship he was an obvious candidate. We are delighted that Tom will continue to be part of The Open and will help us to further grow the Championship in the years to come.”

In his role as Ambassador for The Open Watson will take part in a range of promotional and media activities on behalf of the Championship and will attend The 147th Open at Carnoustie, which is played from 15-22 July.

Watson is also an Honorary Member of The Royal and Ancient Golf Club of St Andrews.

For more information about The 147th Open including tickets visit: https://tickets.theopen.com/

The Open is golf’s oldest championship. Played since 1860 on iconic links golf courses, it is the sport’s most international Major Championship with qualifying events on every continent. For one week each year, the pursuit of the famous Claret Jug trophy is the focus of the sporting world, followed globally by millions of fans.

Staged by The R&A, The Open delivers an annual economic benefit of up to £100 million to its host region, while the Championship’s commercial success supports the development of the game, worldwide,