The GTC is supported by:

The GTC are proud to announce that Thomas Sherreard from the London Club and Hadlow College has become the first Golf Greenkeeping Apprentice to achieve the new City & Guilds Level 2 Certificate in Golf Greenkeeping associated with the new apprenticeship standard and he did it with Distinction.

Not only is Tom the first golf greenkeeper to achieve his apprenticeship, he is the first land-based apprentice to undertake the new style End-point Assessment.

After considerable work carried out by the Greenkeepers Training Committee and the dedicated support and direction from their Employer Group and Technical Working Group, the new-style apprenticeship was launched in September 2016.

This new Apprenticeship hones in on the Knowledge, Skills and Behaviours of every Apprentice and is quite different to the former Work-based Diploma.  The Training Providers are now focussing more on the learner journey – teaching the apprentice the skills and knowledge required to be a fully qualified golf greenkeeper with the support of the apprentice’s employer.

The biggest change is that the learner, although continually taught and assessed throughout their programme of education, is now faced with a series of graded End-point Assessments.

David Croxton, GTC Trailblazer Chairman says, ‘It is through the hard work and dedication from the Employer and Technical Working Groups and City & Guilds, that we have a great qualification to offer greenkeepers of all ages.

‘Credit has to go to a number of people, not least, Tom for the hard work and commitment he has put into his apprenticeship; his employer, the London Golf Club and mentors, Lee Sayers and Darren Cuddihy and his course tutor, Anthony Stockwell from Hadlow College.

‘It is wonderful to see the tireless work that has gone on behind the scenes over the past few years has finally come to fruition.’

‘City & Guilds is delighted to have undertaken the first end-point assessment for the Golf Greenkeeper apprenticeship standard. Although an achievement in itself, this is also the very first end-point assessment within the Agriculture, Environment and Animal Care route, so we are especially proud. City & Guilds supported the greenkeeper employer group which developed the standard and have subsequently worked closely with the British and International Golf Greenkeepers Association (BIGGA) and the Greenkeepers Training Committee (GTC) to develop what we believe is a high quality independent end-point assessment. This is now offered through our team of well-respected Assessors who are standardised to ensure all apprentices have access to fair and impartial assessment to demonstrate their competency. City & Guilds are thankful of all the support and guidance we have received from the golf greenkeeping industry and look forward to maintaining our close working relationship in the future. Ultimately, we believe that with industry backing for the standard and City & Guilds end-point assessment, employers and apprentices will continue to have confidence in greenkeeping as a rewarding professional career.’

Congratulations to Tom and we wish you every success in the future. 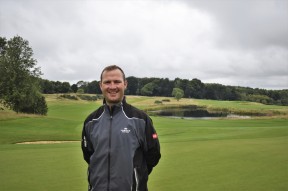